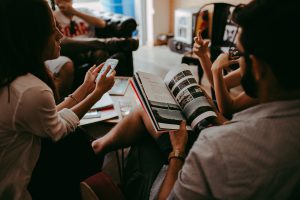 by Shaleeta Harrison, Publications Manager, LINK Magazine and MagsBC Board Member. The full 19-page report can be requested by email from Sylvia Skene, Executive Director, MagsBC.

We sent this survey in August 2019 to 35 people who had been hired under our Internship Subsidy Program and received 14 responses by October. Because only 40% responded, the survey results, analyses, and conclusions cannot be said to represent with certainty the typical experience of interns funded through our internship subsidy program. However, some data trends can be identified.

When reporting on tasks completed during the internship, 65% said that they completed writing and reporting, and 55% helped with research and fact-checking. Over 35% of the interns also reported assisting with social media, website work, marketing, production, and data entry. We noted that 43% said they performed administrative support, which may not have been effective work experience; we will be addressing this in future internships by offering weekly check-ins.

Of the fourteen interns, five of them are now working at traditional magazine or book publishing firms or freelancing as writers, editors or other publishing professionals. Eleven were involved in writing, editing, research, and/or communications as part or all of their work, and most of those were using skills they acquired during their internships. Two of the final three were working in other creative industries.

The skills and experience they most valued:

When asked about barriers to finding work in their field, interns mentioned very low salaries, lack of benefits, and the high cost of living in areas where work exists.

In conclusion, we found many areas to improve through these survey results, and we’ve already made changes to our programming to address some shortcomings. Overall, students were pleased with the experience, and we look forward to offering even more practical work experience opportunities in the near future.

“The skills I learned during my internship were the best bargaining chips during job interviews – my broad admin experience set me apart.” – Christine Novosel (left)

“I am proud that I can contribute to the literary community, in what I hope is a meaningful way, and to help create opportunities for those who want to enter the community.” – Anonymous

“I met a lot of people in and out of the industry thanks to the job.” – Clothilde

“I was so fortunate … to take on many projects and initiatives. My ideas were always considered and implemented, and I was given a huge amount of autonomy over my work. These have been valuable skills at my current employment, ones I couldn’t do without!” – Rebekah Chotem

“[T]hese publishing houses are amazing, especially the local ones as they have a passion that is so amazing and unique, to learn from them was an honour and I hope they receive continued support as they grow and succeed.” – Anneke Feuermann (right)

“I love publishing and dreamed of working in it but could not justify the low salary, lack of benefits and entry-level positions.” – Anonymous

We acknowledge the financial support of the Government of Canada.