Purple Reign: The Many Shades Of Mauvey 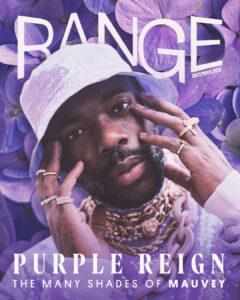 The chameleonic alt-pop artist is leading with love.

By Daniel McIntosh for RANGE December 1, 2021. Photo by Bree Laryea.

Ransford Laryea wades through the crowd at Toronto’s El Mocambo like a sage, greeting people and receiving congratulations for his set. The artist, who performs as Mauvey, just walked off stage from their performance for a national music industry showcase. When we speak shortly after, he tells me, “It feels like the city is calling out to me.” For Laryea, Toronto is a city of dreams. “I got off the plane and I was driving to the hotel, and the CN Tower turned like, mauve, which is the colour that I’ve become attached to.”

“Attached” is putting it softly. As we sit in a stairwell of the concert venue, he’s decked out in his trademark distinction of purple. His corded pants and jacket, the shirt underneath, all mauve. Even his hair is dyed the same soft floral shade. A cursory scroll of his Instagram reveals that this is a near-daily commitment. He says the attachment with purple was born out of an early obsession with the colour’s mutable power. “When trying to figure out what I wanted my artist name to be, I didn’t just want a name, I wanted something that was actually me,” says Laryea, with hands folded over his knees (you can guess the colour of his nail polish). “I felt like it’s the hardest colour to define, you know? It’s a bit blue, a bit purple, it’s a bit grey, it’s a bit silver, it’s a bit pink. It’s a bit of so many things.”

Similarly, Mauvey’s music blurs the lines between alt-pop and hip-hop. There’s a bit of drill, elements of soul, and a bit of hyperpop. “It’s a bit Mauvey.” Laryea was born in Accra, Ghana, where he lived until he relocated to Brixton, a suburb of London when he was four years old. The South London heritage is still evident in his accented speaking voice. While in high school, a basketball exchange program brought him to Agassiz, BC, a small community just outside of Vancouver. Mauvey says it feels like he grew up there as well, and he would return for the occasional holiday. The globetrotting continued, with Mauvey playing basketball in Kentucky, and across Europe. But amid his athletic success, tragedy struck.

“I didn’t just want a name, I wanted something that was actually me.”

Mauvey was in Denmark on Skype, congratulating a friend in America who was drafted into the NBA’s development league. “We were just chatting and then he was like, ‘Yo, I’ll be back.’ And he never came back.” His friend was killed in a hit-and-run that night. The tragedy dislodged his entire sense of self. “It was such a crazy, tragic event,” Laryea says. “I looked at my life in a really different way. I was like ‘what do I actually need to do with my life, what is my purpose with the time that I’ve got?’ I love basketball, but it’s not that.” […]

Visit RANGE to watch, read about, and listen to music by Mauvey.