Dealing with your own crap

By Laura Busheikin for FOLKLIFE Volume 3 2021.

Our house sits on a pile of decomposing human feces, and much like a dragon sleeping on its pile of gold, emitting contented puffs of smoke, or a Hindu holy man sitting cross-legged on a hill of human bones and ash, deep in meditation, we’re happy with our situation.

It’s not just a casual mound of feces. It’s a well-managed pile of poop contained in a professionally built structure that includes an air flow system with multiple venting pipes, two collection chambers, and, like any “normal” toilet, a seat with a lid, a stack of magazines, and WiFi. 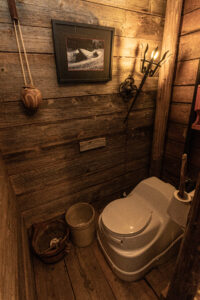 Composting toilets aren’t for everyone, but for the gang here at CoHo Landing, they’re an integral part of living well on the land. When we first set up our land co-operative, we knew we’d have to figure out sewage treatment, since like most of the islands in the Salish Sea, Denman Island doesn’t have municipal infrastructure we could just hook up to.

Groundwater is limited on the islands, whose sensitive ecosystems depend on a plentiful aquifer to survive. Approximately 30% of household water is used in flushing. That’s 9,125 litres per year per person, based on an average rate of five flushes per day using a high-efficiency unit. That’s equivalent to about 90 bathtubs of water.

Once we decided on a composting management system, our “poop committee” met dozens of times, eventually adopting a “poop policy” in which each of our 15 households adheres to a few core principles: the waste is contained, there’s no risk of leaching, the odour is managed, and other household wastewater (AKA grey water) is properly disposed of. 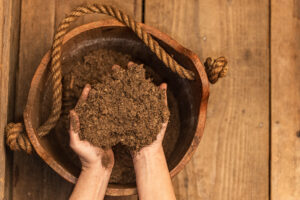 Our family’s model works by collecting human waste in a concrete chamber that’s divided in two. We sit on the throne on top of the chamber, and when done, we add a scoop of wood chips. When one side of the chamber is at its capacity, we close the lid and move over to the other side for a few years, while the first one continues its compost alchemy. Our venting system, which works with differences in temperature to create optimum air flow, guarantees that there is no bad smell.

Except when it doesn’t work. You have to remain vigilant. A couple of years into life with our system, it started to stink. Not as bad as some outhouses we’ve known, but a bummer nonetheless. We didn’t appreciate the smell, but mostly, we didn’t like what it meant: something was wrong. The alchemy wasn’t happening. We needed to investigate.

A compost pile is a complex colony of interconnected living beings. There are worms and grubs and beetles, and millions of teeny tiny things with long names, such as actinomycetes, Bacillus licheniformis, Clostridium thermocelium, Flavobacterium, and many others.

Especially spiders—lots of spiders. The spiders are there for the food. The food is the bugs, attracted in droves to our decomposing waste. Venting pipes act like elevator shafts, enabling flying insects to come and go from the delicious, nutritious, hospitable pile of poop. While dining, the flies lay eggs, the eggs then hatch, and on the cycle goes. This renders a composter the ideal place for a spider to cast its web.

I love how composting our own waste brings us into intimate relationship with the grand cycle of life, death, and rebirth.

And that is exactly what we found when we investigated: spider webs so plentiful and thick that they were clogging up our venting pipes. This was easily rectified by blasting with a sharp stream of water from our garden hose. Whoosh, and it was all clean—odour gone. We do this about twice a year now, along with other maintenance tasks, such as “flattening the pile.” 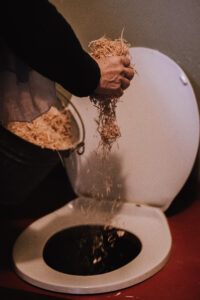 Naturally, as we’ve discovered, the very idea of all this fills some people with horror. I have family members who won’t visit for this reason. And during the public hearing for our project’s rezoning, one person stood up to oppose it because “the smell will be carried by wind currents to neighbouring properties, and it will be horrible!” We have an 88-acre property, and our houses are clustered more or less in the centre. In our co-operative’s ten-year existence, I’ve never heard complaints from any neighbour, near or far.

In fact, our composting system fills me with joy. I love how it allows us to follow the “clean up after yourself” imperative, which is so key to human survival. I love that we’re not using precious resources or running the risk of toxic leaks, spills, or runoff. That the end result is an odourless, fertile, humus-rich product that can be used—with due care*—to build soil.

I love how the composting “dumpster” is such a fertile source for metaphor. And I love how composting our own waste brings us into intimate relationship with the grand cycle of life, death, and rebirth.

Classic sewage solutions are a straight line that ends when everything is sterile, devoid of life.  Composting toilets work as a circle, transforming human waste by making it part of a food web—life feeding life to create more life. It’s a little bit magical, like a dragon, and a little bit mystical, like a holy man. And I get to be part of it every time I take a poop.

*The Government of BC Manual of Composting Toilet and Greywater Practice lays out specific protocols for dealing with the end product produced by composting toilets, which technically is not yet fully composted and may contain pathogens.

FOLKLIFE honours art and agriculture, business and creativity, food and farming, and dwellings and nature, all with a goal to slow the FOLK down.