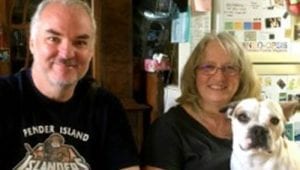 Karl and Stephanie Johanson started Neo-opsis Science Fiction Magazine because they wanted to do something creative after working for years at Disney Interactive.

Stephanie came up with the idea to start the magazine early one morning at about 4 a.m.

“I said, ‘Hey, why don’t we just start a magazine?’ He made the mistake of saying ‘Oh, that sounds like an interesting idea, I’ll think about it in the morning’,” she laughed.

The couple used funds from a government self-employment program, which provided financial support and access to courses about bookkeeping, marketing and promotion.

Numerous friends in the publishing industry gave them advice and helpful tips. Stephanie explains that one publisher had quite the reaction.

“We told him we were going to start a magazine and he said, ‘My only advice to you is run screaming, don’t do it’,” she giggled.

Neo-opsis has subscribers located around the world, has released 26 issues, and has won two Prix Aurora Awards from the Canadian Science Fiction and Fantasy Association. The magazine’s name comes from the Greek words meaning ‘new view’ or ‘new opinion.’

Stephanie said they have a steady clientele but printing costs continue to rise. In the past five years the pair has faced family and personal illness, which has meant the magazine has not stuck to its normal production schedule of publishing three times a year.

Despite the obstacles, the couple is using their skills and creativity to continue doing what they love. Karl has been invited to be an editor guest of honour at science fiction conventions across the country. He explains that Neo-opsis is moving towards digital publishing and they are in the process of creating PDF versions of their current and back issues.

“When we started in 2003 it didn’t seem like anyone wanted to pay for anything online but it does seem like the trend is changing and a lot of people are willing to purchase digital copies of magazines.”

The couple promotes the magazine by attending science fiction conventions, running a website, trading advertisements with other magazines including On Spec, sending posters to libraries and using Magazines Canada to distribute copies to bookstores. They are also members of SF Canada.

Their teamwork is reflected in the magazine’s readership, which is about 50% male and 50% female. Stephanie reviews all submissions and sends her choices to Karl for final approval. As art director, Stephanie chooses and sometimes produces the images for the Neo-opsis covers. Karl has produced several covers, but because he is red-green colour blind, he relies on Stephanie to help with his choice of colours.

Stephanie said she likes publishing new writers because they get very excited after hearing that their work has been accepted. Karl added that he enjoys publishing Neo-opsis because he loves receiving interesting creative story ideas and potential cover art from all over the world. He said unlike some other magazines Neo-opsis values story first and literary quality second.

“In our case we tend to think, did I like this story? Did I enjoy it? Did it move me in some way? Did it inspire me in some way? Then we’ll look at the literary quality … I think it’s easier to fix bad grammar than to fix an uninspiring story.”