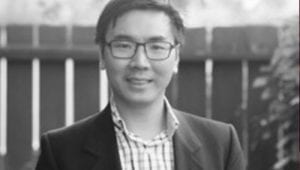 Ricepaper launched in 1995 as a newsletter for the Asian Canadian Writers’ Workshop Society, printed on sheet paper and stapled together, explains the magazine’s executive editor Allan Cho.

The magazine has welcomed and nurtured submissions from Asian Canadian writers for two decades. Writers would come to Ricepaper after being turned away by other publications that didn’t understand or appreciate writing with themes that dealt with the writer’s own Asian Canadian identity and heritage.

“We put many writers on the map who otherwise might have slipped through the cracks of the mainstream literary presses.  No book publisher was going to give out a contract if you had no short story or poem published in a lit mag,” Allan said.

Allan wrote for Ricepaper in addition to volunteering for the magazine’s events when he was a student at the University of British Columbia.  He is also an Asian Canadian Writers’ Workshop board member and one of the founders of the LiterASIAN Writers Festival.

Allan has a Master of Library and Information Science degree from UBC where he works as a community engagement librarian.

“My research is in publishing and bookselling and it’s been interesting leading a magazine from that perspective.”

Most of Ricepaper’s staff have day jobs and frequently use technology including Skype, Dropbox, Google Drive and Doodle to keep up with a busy production schedule.  About three years ago a committee was formed to research the future of the magazine and search for a new business model because the magazine had lost grant funding.

Allan said their webzine has the potential to reach a wider audience and include more submissions because Ricepaper is no longer limited to 48 pages of print.

“With the webzine, we’re going to do podcasting, digital storytelling, the development of a mobile app, just to name a few. We want our readers to be carrying the magazine’s content with them on their phone, tablet and other such handheld devices.”

“We want to build a library that can hold all those titles that are endangered and will wind up in basements [or] worse yet, in dumpsters.”

The magazine has recently begun using its office space to host a writing workshop series called “WriteRice” and is planning to deliver programming with the Asian Canadian Writers’ Workshop to build a community for the next generation of writers.

Ricepaper’s staff have attended conferences in Canada, the U.S. and overseas to discuss the unique cultural importance of their work. Allan said one of the magazine’s editors, Madeleine Thien, has become one of the most prominent voices in the literary scene.

“The passion from our team inspires me to do the work that I do.”

In addition to Ricepaper, Allan has written for The Georgia Straight and Diverse Magazine. His fiction is included in the anthologies The Strangers and Eating Stories. He co-edited Ricepaper’s AlliterAsian: Twenty Years of Ricepaper magazine anthology, which was released in 2015, marking the end of the magazine’s print era by celebrating its literary canon.

“As an editor of that book, it was like looking into an index of the who’s who of Asian Canadian cultural history.”